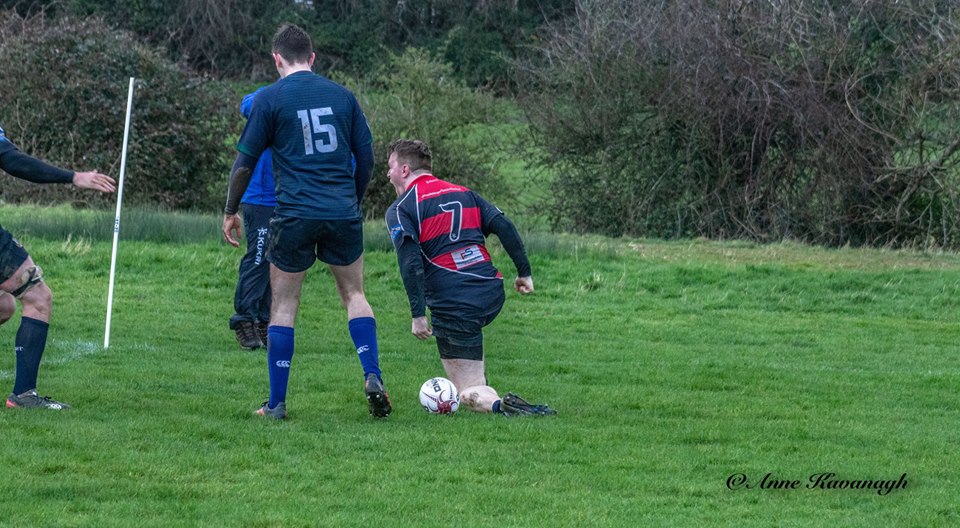 Alan Sower celebrates his first try for the senior team

The Tallaght first team took on leaders AIB knowing they needed to win to have any chance to make the Metro Division 7 final for the third straight year. After two of the warmest weeks ever witnessed in Ireland in February, the weather took a cruel turn with high winds and driving rain making passing and kicking near impossible in the first half. AIB adapted to the conditions quicker and trapped Tallaght in their own half for the first twenty minutes with some smart tactical kicking. Tallaght’s discipline wasn’t great as they were constantly pinged for offside and eventually AIB took advantage to kick a penalty to make it 3-0.

AIB were testing Tallaght out wide but twice Simon Collie came to the rescue with textbook try-saving tackles. Tallaght finally got some territory off some good tactical kicking from Adam Nolan and Darryl Keogh. They tried to maul the ball over the line and when it was deliberately collapsed AIB had a man sent to the bin.

They went close to a try after the forwards had several pick and drives near the line but eventually they were turned over by AIB who were consistently good over the ball all day. Before half-time Tallaght came close again to scoring when Collie looked certain to score after a smart backline move only to be stopped by a high tackle. The ref played advantage and Tallaght got the ball over the line but the ref ruled the ball hadn’t been grounded and then forgot about the high tackle which merited a yellow card and blew for half-time with the score still at 3-0 to AIB.

Tallaght had the advantage of the wind at the in the second half and out-half Dave Clarke was pinging AIB back into their own half with a series of excellent kicks. Tallaght were dominating up front now and from a lineout won by the excellent Alan Moore the maul took off and rumbled ominously towards the AIB line. To everyone’s shock suddenly backrow Alan Sower broke away completely free from the maul and no AIB player noticed in time to stop him getting over the line for a try. It was his first try for the Tallaght first team and he celebrated wildly and was enveloped by all his team-mates who were delighted to congratulate him. The conversion was missed but now Tallaght led 5-3.

From the restart Clarke again put Tallaght in a good position deep in the AIB half with another fine kick. After some strong runs from replacements Jack Russell and Sean Hanlon, Adam Nolan threw a smart pop pass to put prop Tony McManus in for a try in the right hand corner to make it 10-3 to Tallaght. With only eight minutes to go Tallaght just needed to keep AIB pinned in their twenty two. However Tallaght’s discipline, which had been excellent since half-time, deserted them again as they conceded a series of penalties to allow AIB to advance up the pitch. Eventually Simon Collie was shown a yellow card for one team penalty too many and after more pressure AIB finally got over for a try in the corner with two minutes to go to make it 10-8, although the sideline conversion had no chance of making it in the wind. Tallaght got a massive break though when the restart was knocked on by AIB. Tallaght smartly wound down the clock with a series of pick and drives until Dave Clarke got the word from the ref that time was up and he kicked the ball out to signal celebrations from Tallaght.

Tallaght coach Tom Leigh was delighted with the win. “That was a performance of real character against a bloody good AIB side who’s been a credit to the division since being promoted last season. We lost to them out in DCU by two points and we edged it here today by the same margin so there was very little between the two teams. We’re not in the final yet though as we still need to beat Bective away next Friday to guarantee it. But I can’t praise enough the character we showed to keep going even though we were behind for a lot of the game. Our captain Adam Nolan got hurt but stayed on and played through the pain to make some key contributions. Ken McGovern recovered from a bad start in the lineout to be man of the match making several big tackles and always carrying the ball with real menace. Simon Collie didn’t score today but he saved our bacon with his incredible defence on a couple of occasions and was a constant danger with his counter-attacking runs.”

“But I was particularly happy today that the two try scorers today were two of our unsung heroes in Al Sower and Tony McManus. Al is a coaches dream in that he can play anywhere in the pack, front-row, second-row or back row. He’s picked where the team need him to play and he never complains. He just quietly gets on with it and puts in the same consistent performance no matter where he’s asked to play. Tony is a feisty character but one of the mainstays of the squad and he’s similar in that he can play all across the front row and puts in a real shift every time out. It’s lads like this that are the foundation stones of a good squad.”

“We got some great news during the week when a really promising young player Luke Brady joined the squad. He wasn’t playing today but he took part in the warm-up drills with the squad and I’m really delighted he got to see a match which showed how special being a part of Tallaght RFC can be. I also want to express thanks on behalf of the squad and the coaches to all the friends and family who showed up today to support the lads in weather than you wouldn’t put a dog out in. They all got drowned wet but stuck with the lads when it was not looking good. We can’t express how much their support means to us and we share the win today with all of our supporters on the sideline. We just need to win next week against a Bective side who won’t be a pushover and then we can look forward to another final.” 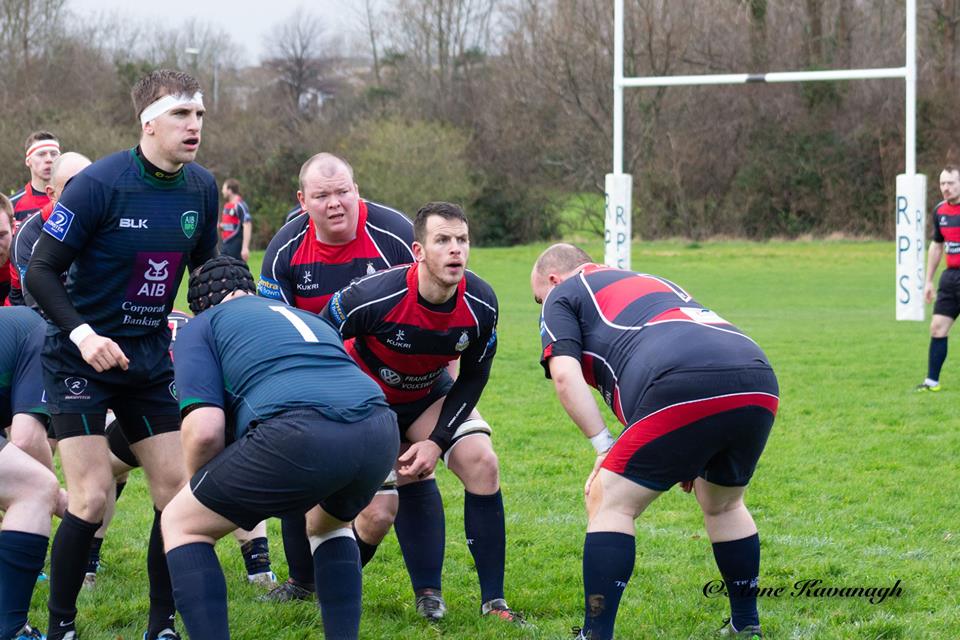 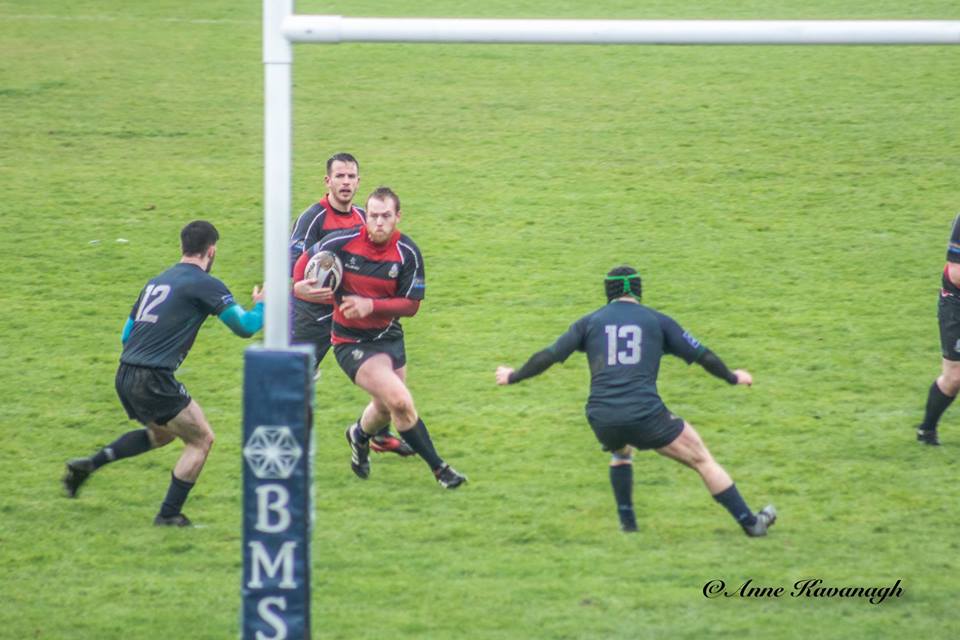 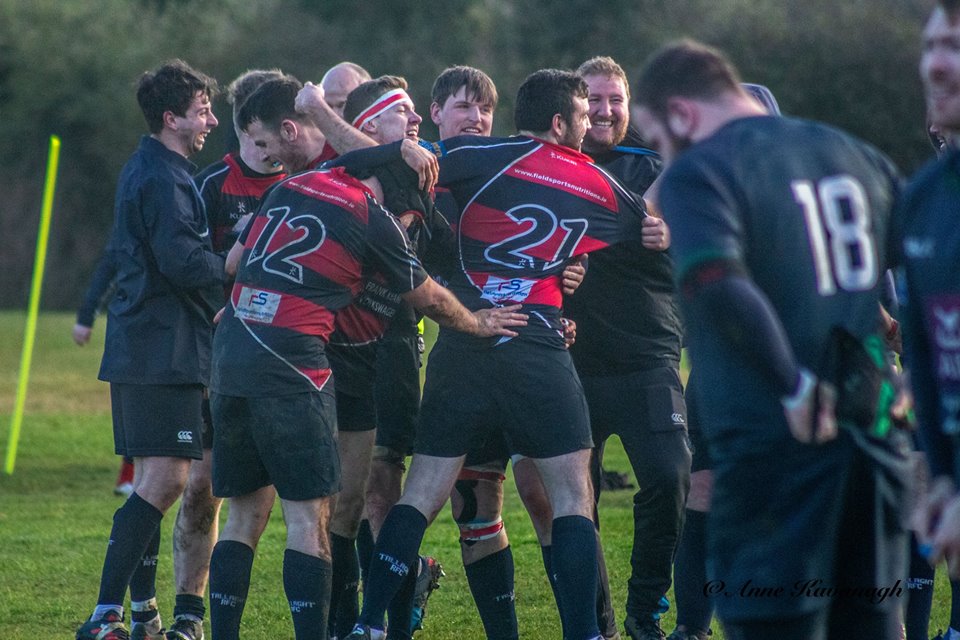 Tallaght celebrate at the final whistle