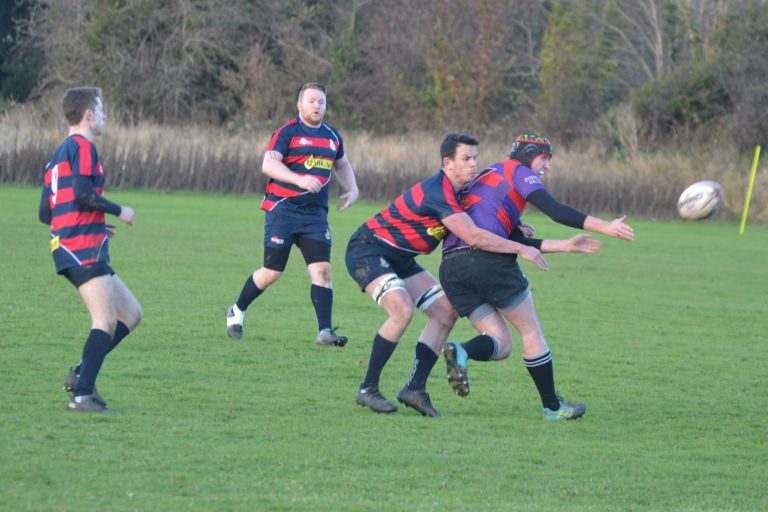 The Tallaght men’s first team took on North Meath/Athboy at home in Division 3 of the Leinster League in their last game before the Christmas break. Tallaght opted to play into the wind and subsequently played nearly the entire first forty minutes stuck in their own half.

North Meath/Athboy dominated possession and they scored two well worked tries and two penalties to take a 16-0 half-time lead. In truth it could have well been worse for Tallaght as the Meath men missed several kicks at goal as Tallaght were constantly penalised for offside.

In the second half Tallaght had the wind behind them but they’re struggled to use it to their advantage. Joe Ivers was shown a yellow card as a culmination of Tallaght’s constant infringing. North Meath/Athboy extended their lead with another penalty to make it 19-0.

Then 15 minutes from time Tallaght finally showed some signs of life in attack. Simon Collie made a great break and he offloaded to Darryl Keogh to score a try under the posts. Then Nick McGuinness exchanged passes with Adam Nolan from a scrum and then raced through a gap to score another try. Nolan converted both of the tries to bring the score back to 19-14 and suddenly Tallaght were eying an unlikely win.

North Meath/Athboy suffered a further blow when they lost their influential centre to a red card for a high tackle on Mark Keogh. Tallaght attacked again but conceded a penalty for not releasing and then North Meath/Athboy took advantage of confusion in the Tallaght defence to break through for a try. They converted to clinch a deserved 26-14 win.

Tallaght will need to regroup during the Christmas/New Year break and come back stronger for the four remaining league fixtures.

Tallaght RFC thanks everyone who came out to support the team today and wishes everyone a Merry Christmas and Happy New Year.

Man of the match: Rob Browner